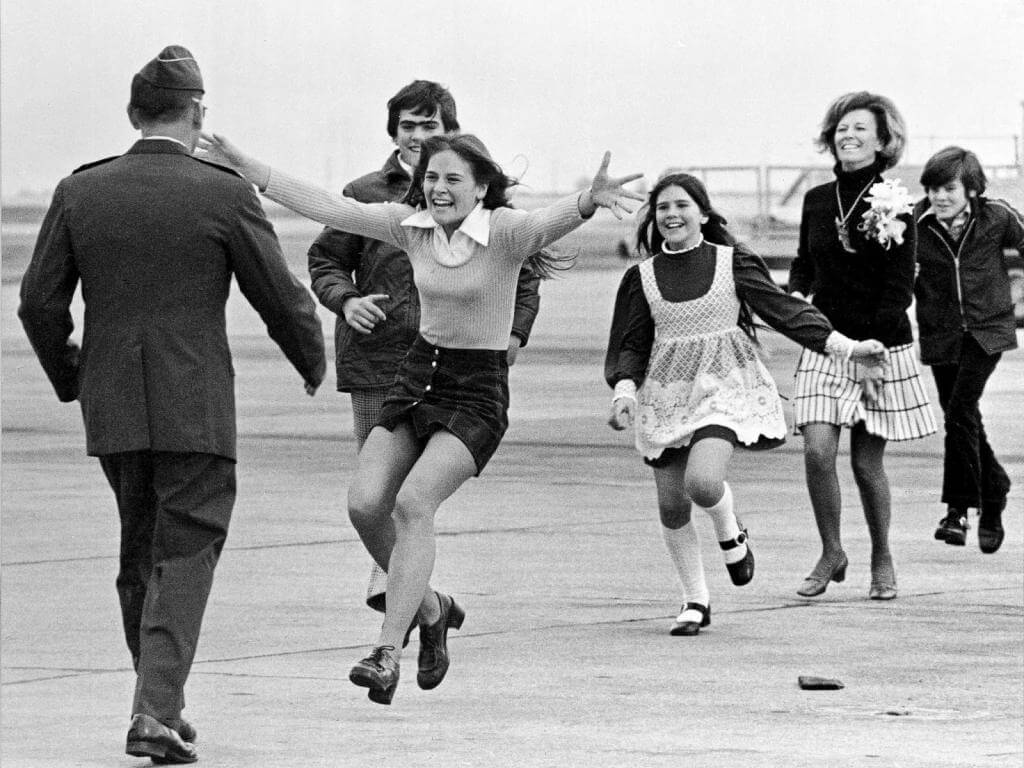 Back in the Day: A ‘‘Burst of Joy’’ at Travis Air Force Base

After spending more than five years in a North Vietnamese camp, Lt. Col. Robert L. Stirm is reunited with his family at Travis AFB, March 13, 1973. Burst of Joy is a Pulitzer Prize-winning photograph by Associated Press photographer Slava “Sal” Veder. The photograph came to symbolize the end of United States involvement in the Vietnam War, and the prevailing sentiment that military personnel and their families could begin a process of healing after enduring the horrors of war.

The following Back in the Day column, which reflects on the “Burst of Joy” photograph captured at Travis Air Force Base in 1973, was originally published in the Fairfield Daily Republic on Nov. 6, 2015.

The Pulitzer Prize-winning photograph of a former American prisoner of war being reunited with his family in 1973 at Travis Air Force Base is iconic, and, as will be explained later, ironic.

From February to April 1973, 591 American prisoners of war were repatriated from North Vietnam via diplomatic negotiations under then-President Richard Nixon called Operation Homecoming. Among the first group of those released was Air Force Lt. Col. Robert Stirm. His Republic F-105 Thunderchief fighter-bomber was shot down over Hanoi on Oct. 27, 1967. Stirm spent nearly six years at the hands of the North Vietnamese and was tortured, beaten and starved. At one point, the colonel weighed less than 100 pounds. During his time there, Stirm lost all the enamel on his teeth. He was hung by his arms and his shoulders came out of their sockets. Stirm’s captors took him in front of firing squads thrice and he was sure he would be killed, but each time it was proven to be just a ploy to get him to disclose information, which Stirm insists he never did.

While the North Vietnamese assumed he knew more than he actually did, one valuable secret Stirm did know but did not reveal was that a fellow captive was a U-2 high-altitude spy plane pilot. Stirm spent a year in solitary confinement, and after three years he was placed in a cell next to another prisoner of war who had been shot down just one day before him – Navy pilot John McCain. McCain later became a U.S. senator and ran unsuccessfully for president in 2008.

After their release, Stirm, McCain and 10 other POWs were interviewed by veteran broadcast journalist Stephen A. Rowan. He compiled the interviews about how the Americans survived their captivity and torture into the 1973 book, “They Wouldn’t Let Us Die.”

The POWs who returned to U.S. soil via Travis Air Force Base were greeted by enthusiastic crowds numbering in the hundreds assembled on the tarmac. Approximately 40 photographers were present to chronicle the event, among them Slava Veder of The Associated Press. He was one of two AP photographers assigned to the homecoming and had drawn photo-taking detail that afternoon while his counterpart worked the darkroom processing images. When Stirm reached the tarmac, his family – Lorrie, 15, Robert, 14, Cynthia, 11, wife Loretta and Roger, 12 – suddenly raced toward him and Veder began snapping pictures. He captured the exuberance and motion of the family members – especially Lorrie – and it contrasted with the rather rigid gait of Colonel Stirm.

The photograph, labeled “Burst of Joy” in 1974, was awarded the Pulitzer Prize for feature photography. Veder didn’t even know it had been submitted and chalked his award up to luck as other photographers had taken similar shots. The Daily Republic article on the event the next day did feature a picture of Stirm and his family, but it was not Veder’s. Instead it was a second or two afterward when the colonel was swallowed up octopus-like in a sea of hugging arms.

“Burst of Joy” has become an iconic shot of the Vietnam War era and seemingly represented to many the reunification of a soldier and his family. But the old saying that “a picture is worth a thousand words” is sometimes not completely accurate. The complexities of human existence and interactions are sometimes just not able to be captured in one moment. After being released from captivity for nearly 5 ½ years and just three days before he landed at Travis, Stirm was given a letter from his wife by a chaplain. A “Dear John” letter. It read in part: “I have changed drastically – forced into a situation where I finally had to grow up. Bob, I feel sure that in your heart you know we can’t make it together – and it doesn’t make sense to be unhappy when you can do something about it. Life is too short.” The Stirms were divorced within a year after the homecoming and Loretta married the attorney who prepared their divorce action. The joyous moment captured in a photo that moved people from all over the world was at best bittersweet for Colonel Stirm. He was later awarded the Silver Star for his service in Vietnam.